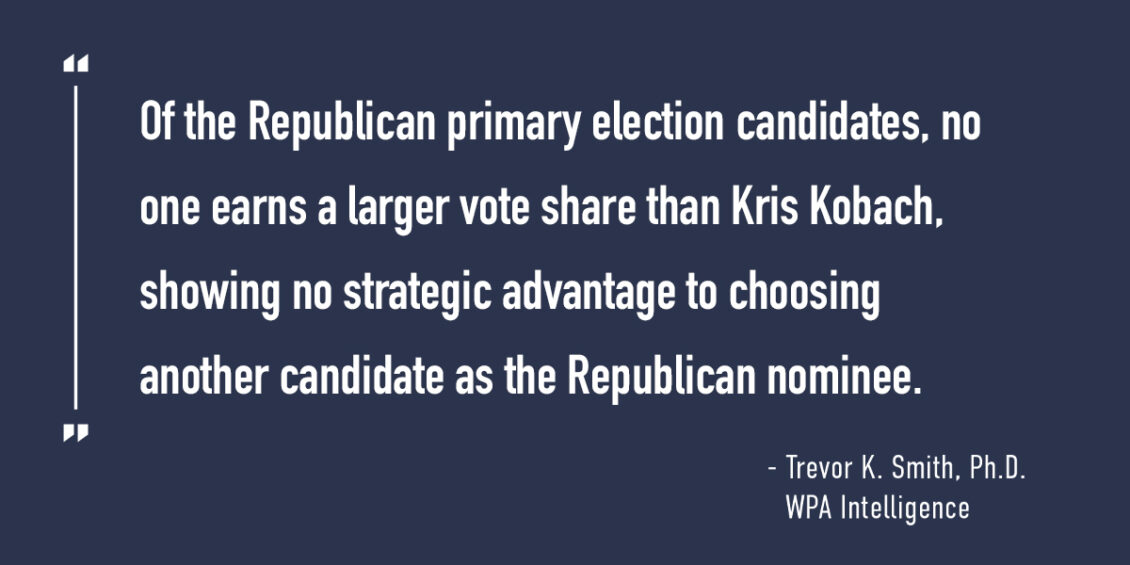 “Republican Derek Schmidt currently leads Democrat Laura Kelly in the race for governor by a similar margin as Kobach does in the attorney general race,” said pollster Trevor K. Smith, Chief Research Officer for WPA Intelligence. “Of the Republican primary election candidates, no one earns a larger vote share than Kris Kobach, showing here is no strategic advantage to choosing another candidate as the Republican nominee.”

“Kris Kobach is in a commanding lead heading into the Republican primary for attorney general,” said Smith. “Based on these data, Kobach is clearly the favorite to take on the Democratic nominee this fall.”

Kobach crossed the 50 percent mark in previous polling of the three-way Republican primary conducted by WPA Intelligence. His nearest competitor for the nomination polled at 12 percent, while Kobach polled at 52 percent, making him the frontrunner and presumptive Republican nominee.

“Kansans recognize that Kris Kobach is the candidate best prepared to serve as attorney general. In fact, he is in federal court today defending military personnel at Wichita’s McConnell Air Force Base against the illegal actions of the Biden Administration,” said campaign consultant J.R. Claeys. “While his opponents in the Republican primary argue that Kobach is too conservative to win a general election, the polling shows that is not true. None of Kris Kobach’s primary opponents receive a larger vote share in the general election.”